Upon taking office in August 2002, President Alvaro Uribe Velez of Colombia was faced with a difficult strategic situation that required a fresh approach. This was forthcoming in a Democratic Security and Defence Policy which radically reoriented the state posture towards its principal security challenge – an insurgency inextricably linked to the narcotics trade and other criminal activity. Previously committed to negotiation, the government opted for counterinsurgency. Though multifaceted in its dimensions, the new policy effectively assigned the cutting edge role to the Colombian armed forces (COLMIL), most prominently the dominant service, the army (COLAR). This required that the forces aggressively pursue a well-funded, entrenched adversary within a complex international environment decidedly hostile to state efforts at stability operations. This they have done in impressive fashion. These same armed forces had already set the stage for the shift in policy by pursuing a reform movement that had allowed them to wage more aggressive operations, while the previous administration of President Andres Pastrana (1998-2002) had unsuccessfully sought a negotiated settlement with the main insurgent group, Fuerzas Armadas Revolucionarias de Colombia, or Revolutionary Armed Forces of Colombia (FARC), and to a lesser extent with the distant second group, Ejercito de Liberacion Nacional, or National Liberation Army (ELN). The self-defense groups of the Autodefensas Unida Colombia, or United Self-Defense Groups of Colombia (AUC), the so-called “paramilitaries,” were a symptom as opposed to a cause and did not threaten the government through insurgent activity. Continued combat was necessary, because neither FARC nor ELN altered their military posture during negotiations. To the contrary, FARC used Bogota’s provision of what was to be demilitarized space, the Zona de Despeje, to facilitate an intensification of the conflict through the use of main force warfare, while terror and guerrilla action continued. Thus Colombia’s counterinsurgency approach under President Uribe built upon a foundation already put in place by the armed forces, a foundation upon which a national as opposed to a virtually stand-alone armed forces campaign could be constructed. This has resulted in a level of state commitment, led by continuous military operations. The insurgents thus far have been unable to counter strategically. Bogota’s strategy recognized the need to dominate local areas by providing a security umbrella under which the normal functions of the state could be exercised. The operational vehicle for carrying out the effort was to place a “grid” over the target area, with specific forces carrying out specific missions, all coordinated in such manner as to stifle insurgent activity. The basis for all else was the deployment of local forces. These Soldatos de mi Pueblo (“Home Guards”) were indispensable to establishing state presence in affected areas. Local forces had all the more impact, because the police, using the same approach, systematically established presence in every municipio (county) in the country. Military police integration highlights the increasingly joint nature of Colombian operations. Though answering to a Commanding General (CG) Joint Command, the military services themselves had functioned together more as a matter of courtesy than command. This had not posed any insuperable problems, particularly given COLAR’s dominance, but it was not the ideal way to conduct counterinsurgency, where unity of command was crucial. 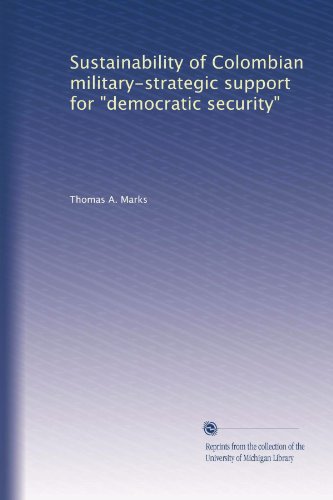