The Hanoverians: The History of a Dynasty

George, the elector of Hanover, inherited the throne of Great Britain on the death of Queen Anne in 1714. George I and his son, George II, continued to spend much time in Germany, insisting on the interests of Hanover influencing on British foreign policy. Lacking the popular touch and perceived as foreigners, they drew little affection from their subjects, though George II survived the dynasty’s greatest crisis of the invasion of England by Bonnie Prince Charlie in 1745. George II’s grandson, George III, reigned for sixty years (1760-1820), presiding over Britain’s conquest of India and Canada and its loss of the American colonies. His son, George IV, Prince Regent during his father’s madness, drew scandal to the monarchy. The death of William IV, the ‘Sailor King’, in 1837 brought his niece Victoria to the throne. &lt;em&gt;The Hanoverians&lt;/em&gt;, in a series of personal portraits, shows how these kings, though constitutional monarchs, continued to exert considerable influence, crystallising politics and society. 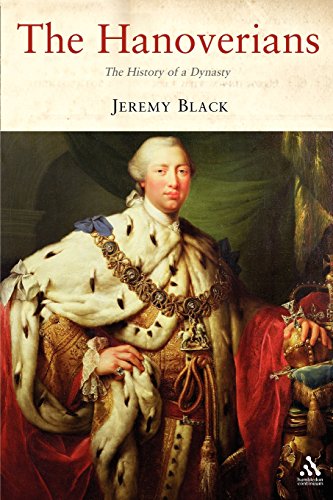 The Hanoverians: The History of a Dynasty