The PLA and the Kosovo Conflict

The discussion of the “China Threat” in the industrialized countries of the world, and especially in the United States, has been prompted by a number of factors. Although facing no external threat and having many internal needs, the People’s Republic of China (PRC) has for a decade raised its defense budget between 12 and 13 percent a year. Moreover, numerous substantial military expenditures are not included in the defense budget; the actual defense budget is generally estimated at three to four times the published figure. China has made major weapons purchases, mainly from Russia and Israel, and has achieved advances in indigenous development as well. A U.S. congressional committee report issued in early 1999 has disclosed that several of these advances occurred as a result of Chinese espionage operations in the United States. 1 In addition, a U.S. Defense Department report issued at the same time predicted that the balance of power across the Taiwan Strait would shift in favor of the PRC in the next 3 to 5 years.2 The PRC’s rhetoric has also become increasingly militant. As China appeared more threatening to the West and to Japan, its own media increasingly portrayed the PRC as menaced by an industrialized world bent on forcing its ideology on the rest of the planet, and on China in particular. In China’s analysis, Washington, unable to cope with the idea of a powerful PRC, wants to dismember China so that the United States can remain the hegemon of the international system. This was the prism through which the Chinese leadership viewed the Clinton administration-led North Atlantic Treaty Organization (NATO) intervention in the Federal Republic of Yugoslavia (FRY). The operation was construed as a possible prelude to intervention into the PRC. The People’s Liberation Army (PLA), charged with the defense of the ancestral land, debated with particular urgency what would be the most appropriate way to respond to foreign pressure. This monograph will summarize those debates and analyze the strengths and weaknesses of the strategies advocated. 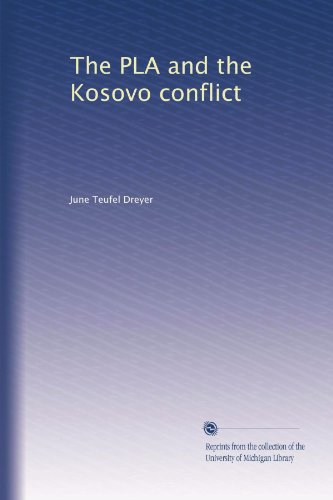 The PLA and the Kosovo Conflict