What is Eurasia? And Why Does it Matter?

Co-Sponsored by The Madeleine and W.W. Keen Butcher History Institute at the Foreign Policy Research Institute and the Slavic Studies Department at the University of Pennsylvania. Co-sponsored by Carthage College. 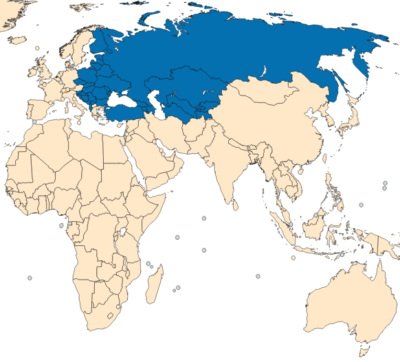 December 2016 marked the 25th anniversary of the fall of the Soviet Union. 2017 marks the 100th anniversary of the founding of Soviet Russia. Both dates give reason to reexamine the history of Eurasia, a vast region with many ethnic groups and multiple religions, at times united under authoritarian governments, at other times divided between dozens of countries.

To what extent is Eurasia a coherent region? What forces have driven its development over time. What led to the Soviet collapse? How did the post-Soviet conflicts unfold? How did Putin’s leadership shape today’s Russia? And finally, what will US relations with Eurasia look like in the coming years? These are the questions that FPRI’s Eurasia History Institute for Teachers will address in October 2017.

Is Eurasia a coherent region? What shared features – political, religious, social, economic—have knit together the region that stretches from the Black Sea to the Pacific Ocean.  What factors have divided the region?

Tsar and Sultan: Eurasia Between Russians and Turks

For much of the last several centuries, Eurasia has been divided between several great civilizations: Russian, Turkic, Persian, Chinese, and others.  This session will focus on the interaction of Turkic and Russian groups in central and western Eurasia. It will note that cultural and religious divides often did not overlap with political boundaries, and will explore Eurasia’s multicultural and multiethnic borderlands before the founding of modern nation states.

Rethinking the 100th Anniversary of the Russian Revolution

When and why did the nations of Lithuania, Latvia, and Estonia emerge? How did these small peoples achieve self-government in a region long dominated by more numerous and more powerful groups?  When the Soviet Union annexed their territory and tried to extinguish their cultural identity, how were they able to retain their sense of nationhood? In what way did this facilitate their emergence from the USSR in the late 1980s?

The dissolution of the Soviet Union was accompanied by the emergence of several ethnic conflicts across its territory.  Was the Soviet Union’s collapse relatively violent, or should we instead be surprised at how contained these conflicts were?  What factors drive the conflicts – in Georgia, Moldova, and Nagorno Karabakh – that are scattered around the post-Soviet space?

Historic Moments as a Tool for Teaching Critical Thinking

Teaching history is a difficult balancing act. Whether we teach in high school or college, we must navigate tensions between depth and coverage, content and analysis, the past and its relationship to current events. This workshop will examine how historical scholarship can be incorporated into classroom instruction to help students master factual knowledge and engage in rigorous critical analysis. We will focus on competing interpretations of the Russian Revolution and explore the anatomy of historical arguments.

After the USSR collapsed, there was great hope within these countries and abroad that they could develop into liberal democracies. Today, only three of fifteen former Soviet states are solidly democratic, while most of the rest are solidly autocratic.  What explains the disappointing result?  What have post-Soviet countries developed so differently from the Eastern European countries of the former Warsaw pact?

The Rise and Fall of the USSR as a Global Power

Why did the Soviet Union rise so rapidly to become one of the world’s two superpowers? How did it collapse equally rapidly, to its own surprise and the surprise of its neighbors?  Is the history of the Soviet Union unique, or does it portray patterns of governance found elsewhere in Eurasia?

Russia vs Europe and the Lands in Between

Many in the West were surprised by the confrontation between Russia and the West that emerged in 2014 with the annexation of Crimea. To what extent is Russian foreign policy driven by constant features? To what extent does it depend on Putin personally? How should we interpret Russian goals in Georgia, Ukraine, Syria, and elsewhere?  Is the Kremlin succeeding in achieving its aims?

Forty participants will be selected to receive:

Please email to history@fpri.org a resume, a one-paragraph statement describing your relevant teaching or other professional experience, and a brief statement of how your students or school district will benefit from your participation. NOTE: At the time of application, you are asked to make a commitment either to prepare a curriculum unit based on the weekend or to do in-service activities based on the weekend (in exchange for a stipend).

Schools with a school membership in FPRI’s Wachman Center are guaranteed one place at one History Institute weekend per year. For information about school membership, contact: egilman@fpri.org.

For information about future and previous programs, click here.