A Nation Must Think Before it Acts The Right Way to Lose a War: America in the Age of Unwinnable Conflicts
Share: 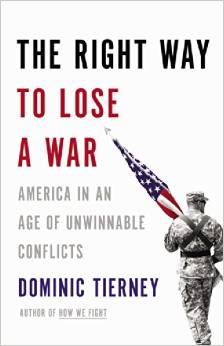 For a century, the United States steadily accumulated a string of military triumphs. But since 1945 the onslaught of failures and stalemates in Korea, Vietnam, Iraq, and Afghanistan has exposed the country's inability to change course after battlefield setbacks---with grave consequences for thousands of American soldiers and our allies. The Right Way to Lose a War provocatively explains how America can draw failed campaigns to a close without compromising its core values through three specific steps---surge, talk, and leave. The Right Way to Lose a War is an essential guidebook for life in an era of unwinnable conflicts, a book made necessary not only by Iraq and Afghanistan, but the future quagmires that may yet come.

Dominic Tierney is a Senior Fellow with FPRI's Program on National Security and associate professor of political science at Swarthmore College. He received his Ph.D. in international politics from Oxford University, and has held fellowships at the Mershon Center at Ohio State University, the Olin Institute at Harvard University, and the John F. Kennedy School of Government at Harvard University. He is the author ofFailing to Win: Perceptions of Victory and Defeat in International Politics (Harvard University Press, 2006), with Dominic Johnson, which won the International Studies Association award for the best book published in 2006, FDR and the Spanish Civil War: Neutrality and Commitment in the Struggle that Divided America (Duke University Press, 2007), and How We Fight: Crusades, Quagmires, and the American Way of War (Little, Brown and Co., 2010). His writing has appeared in The New York Times, The Los Angeles Times, International Security, and Orbis, among other outlets. He blogs regularly at The Atlantic.

This event is free and open to the public, but reservations are required.
Dinner immediately following for FPRI Members at the $1000 Level.
(Must RSVP two business days in advance to be eligible)
Please RSVP to [email protected] or (215) 732-3774 x 200

Dominic Tierney - Dominic Tierney is a Senior Fellow with FPRI’s Program on National Security and associate professor of political science at Swarthmore College.