A Nation Must Think Before it Acts New Book Puts Taiwan Under the Microscope
Share:
FPRI News 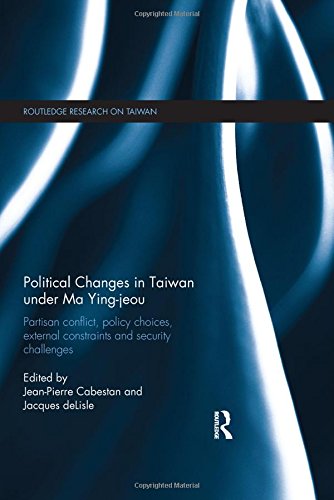 PHILADELPHIA, PA — The Foreign Policy Research Institute (FPRI) is proud to announce the release of a new book co-edited by Jacques deLisle, Director of FPRI’s Asia Program, and Jean-Pierre Cabestan of Hong Kong Baptist University. Political Changes in Taiwan Under Ma Ying-jeou: Partisan Conflict, Policy Choices, External Constraints and Security Challenges (Routledge, 2014) is a collection of papers on the changes in Taiwan’s domestic politics and foreign policy since the return to power of the Kuomintang (KMT) in 2008. This edited volume — based upon the results of a conference co-sponsored by FPRI, Hong Kong Baptist University, and the Adenauer Foundation — is part of the Routledge Research on Taiwan Series.

This book provides a comprehensive analysis of the return of the Kuomintang (KMT) to power, and examines the significant domestic political, economic, social and international challenges and changes that have characterized Taiwan since 2008. It identifies the major domestic, cross-Strait and foreign policy trends, and includes the following chapters:

Continuity in the 2012 Presidential and Legislative Elections
Nathan F. Batto (University of the Pacific)

The Role of the Legislative Yuan under Ma Ying-jeou: The Case of China-Policy Legislations and Agreements
Dai Shih-chan (University of New Orleans) & Wu Chung-li (Academia Sinica)

Part III: The Relations Across the Taiwan Strait

In turn, the contributors look towards the final years of Ma’s presidency and beyond, and the structural realities – both domestic and external – that will shape Taiwan’s future.

Jacques deLisle is Director of FPRI’s Asia Program and the Stephen A. Cozen Professor of Law at the University of Pennsylvania, where he is also Professor of Political Science, Director of the Center for East Asian Studies and Deputy Directory of the Center for the Study of Contemporary China. He regularly publishes commentaries on Asian affairs as FPRI E-notes and in other media, and articles in FPRI’s journal, Orbis.