A Nation Must Think Before it Acts Critical Acclaim for Walter McDougall’s “Tragedy of U.S. Foreign Policy”
Share:
FPRI News 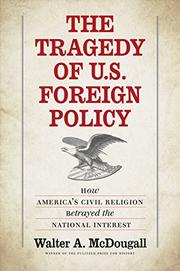 Since its publication in late 2016, Walter A. McDougall’s  “The Tragedy of U.S. Foreign Policy: How America’s Civil Religion Betrayed the National Interest” has received critical acclaim in numerous journals, magazines, and newspapers – among them The Wall Street Journal, The New York Times, Foreign Affairs, The National Interest, and many others.  These reviews are collected below.

Hailed by one writer as “a national treasure” and “America’s greatest living historian” by another, Walter McDougall is the Co-Chair of FPRI’s Madeleine and W.W. Keen Butcher History Institute and the Alloy-Ansin Professor of International Relations and Professor of History at the University of Pennsylvania. McDougall is also Chairman of FPRI’s Board of Advisors. His book “The Heavens and Earth: A Political History of the Space Age”  received the Pulitzer Prize in 1987.

“McDougall is at his most convincing describing how American civil religion episodically drove the country’s thinking, from the early days of the Republic to Truman.”
David Sanger, New York Times Book Review, (December 2016)

“One of this disturbing book’s many strengths is its reminder of a United States before it entered the world’s stage. During the 19th century four important circumstances constrained officials’ visions of grandeur: the new nation’s­­ relative weakness; fears of picking a fight with Western powers; a sense of the fragility of republics both ancient and modern; and what the author calls a belief in the ‘incorrigible imperfection of human nature.”
D. G. Hart, Wall Street Journal (December 2016)

“A sense for this kind of paradox is what is really splendid about McDougall as a historian. Based on his narrative, one could list a few ironic truths about international power politics that resonate in our own time.”
Christopher Caldwell, First Things (February 2017)

“the most creative and eccentric book on the history of American diplomacy”
Charles Sharpe, The Montreal Revue (May 2017)

“McDougall is at his best when zooming in on the details of history and revealing the truth to be rather different from what other writers have led us to believe.”
Dan McCarthy, Reason (June 2017)

“A careful reading of McDougall’s history provides a good start for those with eyes to see.”
William Anthony Hay, Liberty and Law (January 2017)

“Few scholars of foreign policy take the role of religion as seriously as does Walter McDougall.”
Regina Munch, Commonweal (December 2016)