A Nation Must Think Before it Acts The Palestinian Islamic Jihad’s U.S. Cell [1988–95]: the Ideological Foundations of Its Propaganda Strategy
Share:

The Palestinian Islamic Jihad’s U.S. Cell [1988–95]: the Ideological Foundations of Its Propaganda Strategy

Arab nationalism, territorial nationalism, and Arab socialism, among other ideologies, all heralded the restoration of the Middle East in early twentieth century to its pre-colonial, former glory. During the 1950s, various leaders and movements had surfaced, each attempting to win the hearts and minds of the people based on some exclusive, and supposedly undeniable, identity. Whether rooted in the historic primacy of Egypt or the cultural-linguistic bond of the Arab people, men of varying stature and inclinations identified the sagging state of the Arab-Muslim people and offered up a path that was said to guarantee redemption. Nevertheless, by the late 1960s, and with the humiliating defeat of the Arabs by the Israelis in 1967, many of these ideologies and their “paths of redemption” proved to have failed. Meanwhile, the Islamist trend, which traces its ideological roots to the forefathers of the Salafiyya of the late nineteenth and early twentieth centuries, reemerged in the West Bank and the Gaza Strip during the mid-1970s. Growing steadily into one of the strongest political forces on the Palestinian scene, it was not until the 1987 Intifada that the Islamic movement in the Palestinian Territories had transformed into a major force able to unsettle the existing balance of political power in Palestinian society.[1]

Because the majority of Palestinians are Muslim, and because Islam has historically played at least a rudimentary role in Palestinian society, the Palestinian Islamic movement has enjoyed broad popular support. Additionally, both Israel’s continued existence and its unwelcome branding as a foreign presence in the region serve as reminders of local weakness, threatening both the Arab identity and Islamic character of its embattled people. The Islamic movement in Palestine has capitalized on this situation by seeking to champion the Palestinian cause where others have failed. This endeavor represents both the Islamization of the conflict and the politicization of Islam, based on the necessarily universal application of Islam and the political tenets inherent in it. Viewing the conflict with Israel through an Islamic lens therefore offers an alternative set of causes and solutions, all of which are religiously rooted. Whereas previous paradigms have attempted to pinpoint the underlying cause of the conflict in a multitude of ways, Meir Litvak, professor of Middle East history at Tel Aviv University, maintains that the Islamic trend “portrays it as a battle between two rival religions, Islam and Judaism, or between two opposing absolutes.” Further, he adds that the religious idiom has played a unique role in the evolution of the Palestinian-Israeli conflict.[2] The Palestinian Islamic Jihad (PIJ), a Palestinian resistance organization founded in the early 1980s by Fathi al-Shiqaqi and Sheikh cAbd al-cAziz cAwda in Gaza, offers a clear demonstration of this. [3]

Forging together an Islamic platform with Palestinian national aspirations, the PIJ identifies Palestine “as the central cause of the modern Islamic Movement.”[4] Aspiring to liberate Palestine, based on an Islamically-derived imperative, it established itself on the local scene as the armed, ready-and-willing defender of the Palestinian people. It looked to the Islamic past to identify legitimate means for its struggle; it found these means in the concept of jihad (holy war). Seeking to accomplish its goal through every possible venue, it relied on diverse means to support its cause. In 1988, the PIJ informally established a cell in the United States for the sole purpose of propagandizing to raise funds for the violent liberation of Palestine. This cell gained the PIJ numerous U.S. supporters and collected thousands of dollars towards it deadly enterprise. The moneys raised directly funded, among other things, violent attacks carried out by PIJ operatives against Israeli civilians. However, following years of undercover surveillance, the cell was raided and subsequently dissolved in 1995 by the FBI, culminating in the warrant, arrest, and trial of several cell members.

The purpose of this study is to analyze the content of the U.S. cell’s propaganda and to identify its ideological foundations from within the formulations of a group of well-known modern ideologues. The study begins with this group of ideologues and highlights the specific concepts that influenced the PIJ. This will be followed by an introduction to the PIJ and the creation of its U.S. cell. Finally, this study will analyze the cell’s propaganda materials with regards to the established context.

The cell’s propaganda, some generated by cell members and some originating from the group’s Middle East-based operatives yet distributed in the United States, includes conference speeches, publications, and solicitations. These materials were assembled and translated by the U.S. Government as part of its 2005 case against PIJ cell members, USA v. Al-Arian et al and will be referenced accordingly. Any other Arabic material not identified with this case was translated by the author of this study. The analysis of these materials clearly illustrates the PIJ’s ideological platform, its perceived problems, and its proposed solutions. It also identifies the way in which the PIJ employs its ideology as a fundraising tool. This study represents the first analytical look at this body of material that focuses on sourcing and understanding its ideological content. It the hope of the author that this study will offer new insight into the PIJ’s views and modus operandi as the group is still a force to be reckoned with in the ongoing Palestinian-Israeli conflict. 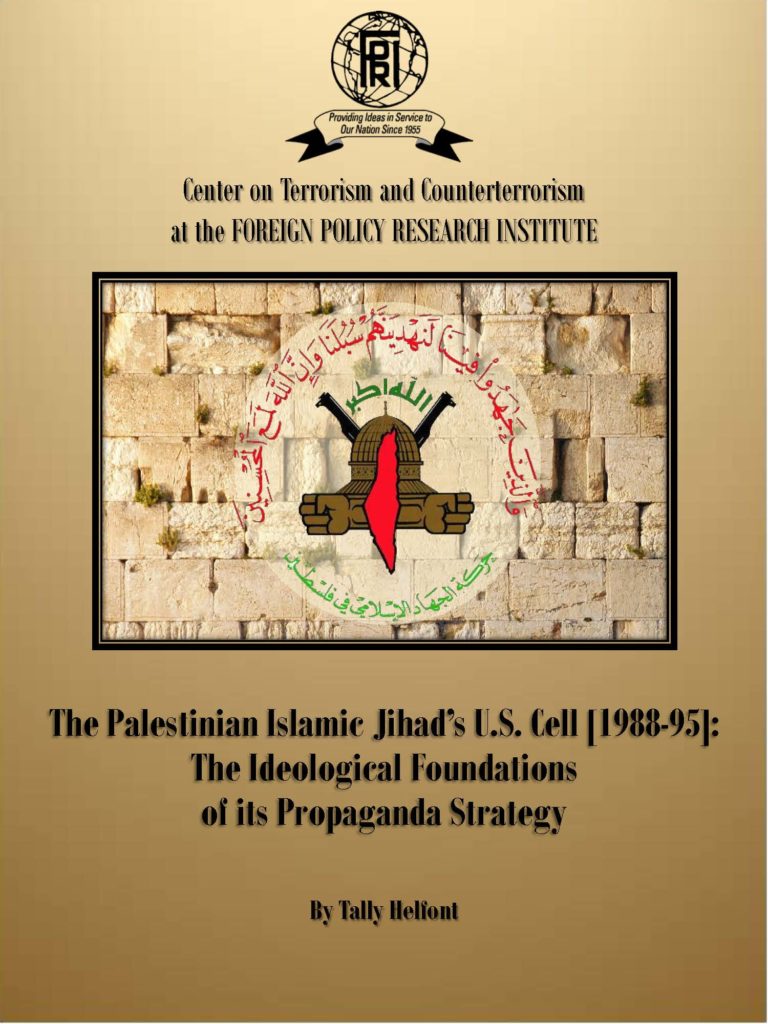