The Andean nations of Colombia, Peru, and Bolivia are the heartland of cocaine, as well as a growing heroin source. Using extensive field research, Clawson and Lee examine the configuration of the drug industry from field to arrival in the US, from the farmers to the processors, the traffickers, and the international criminals. They analyze the economic and political impact of the drug business on the Andean nations, including such problems as the undermining of legitimate business and the exacerbation of violence and corruption. The fight against narcotics in the Andean nations has included a wide range of strategies, implemented with varying degrees of enthusiasm – promotion of alternative crops, eradication of plants, destruction of labs, interdiction of flights, and negotiations with drug lords. Some of these policies have had counterproductive social, political, and economic effects, eg, generating popular sympathy for drug kingpins, driving rural populations to support guerrilla movements, attracting new migrant to coca-growing areas, or acting as a coca price support program by destroying excess leaves. The US government has financed much of the Andean counternarcotics effort. Clawson and Lee ask such questions as whether a different mix of policies, with the same dollars spent would have done more to reduce the coca flow, whether curbing narcotics production is an achievable objective (and if not what US overseas programs should attempt to accomplish), and whether the Andean countries would benefit economically and politically from the legalization of drugs. 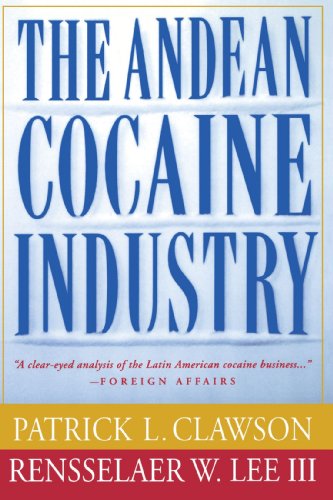